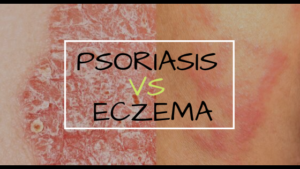 Two of the most common skin issues that people face are psoriasis and eczema. Psoriasis vs eczema which one are you suffering from? Both of these skin issues are very similar to each other and many a time’s people get confused about which one they might be suffering from. And so it is important for people to get themselves checked so that they know whether they are suffering from psoriasis or eczema. Psoriasis is usually a genetic issue however sometimes it might also be caused due to what is happening inside your body. Whereas eczema is normally caused due to environmental factors such as exposure to the sun rays or it might also be caused due to the usage of products containing some harsh chemicals. It is sometimes also caused as a reaction to something that you might have eaten. Eczema is usually common amongst children whereas psoriasis is common amongst adults.

Psoriasis vs Eczema- what is the main difference between these two after all?

When one suffers from psoriasis the skin raises and becomes rough and red. This particular area of the skin becomes itchy and gets covered with a sort of whitish silverish layer and it is likely to bleed as well. You might also see some small red patches which would later turn scaly as well.

Whereas when one suffers from eczema the skin turns dry, red and extremely itchy. You can see some small blisters also the skin might swell up and crack as well. You will find rashes on cheek, arms or legs, near the joints, behind the knees and inside the elbows. When one suffers from eczema you are likely to see an extra fold of the skin beneath their eyes, this is known as the Dennie Morgan fold. Meanwhile people suffering from psoriasis are likely to suffer from arthritis as well. Both of these skin issues cause extreme discomfort and the skin feels extremely itchy too!

How to Treat These Skin Issues?

For people suffering from eczema it is preferred that they sunbathe, you can use tanning beds to help you. Make sure to moisturize your skin and avoid soap and other products which cause the skin to dry up. Instead get oatmeal skin treatment done this will help you a lot! There are many antibiotics which also help in as well.

Meanwhile, for psoriasis you will need to use some medicated creams and ointments. Take help of bath treatments, you will also need to go for photochemotherapy and for phototherapy this will allow you to get rid of this skin issue!